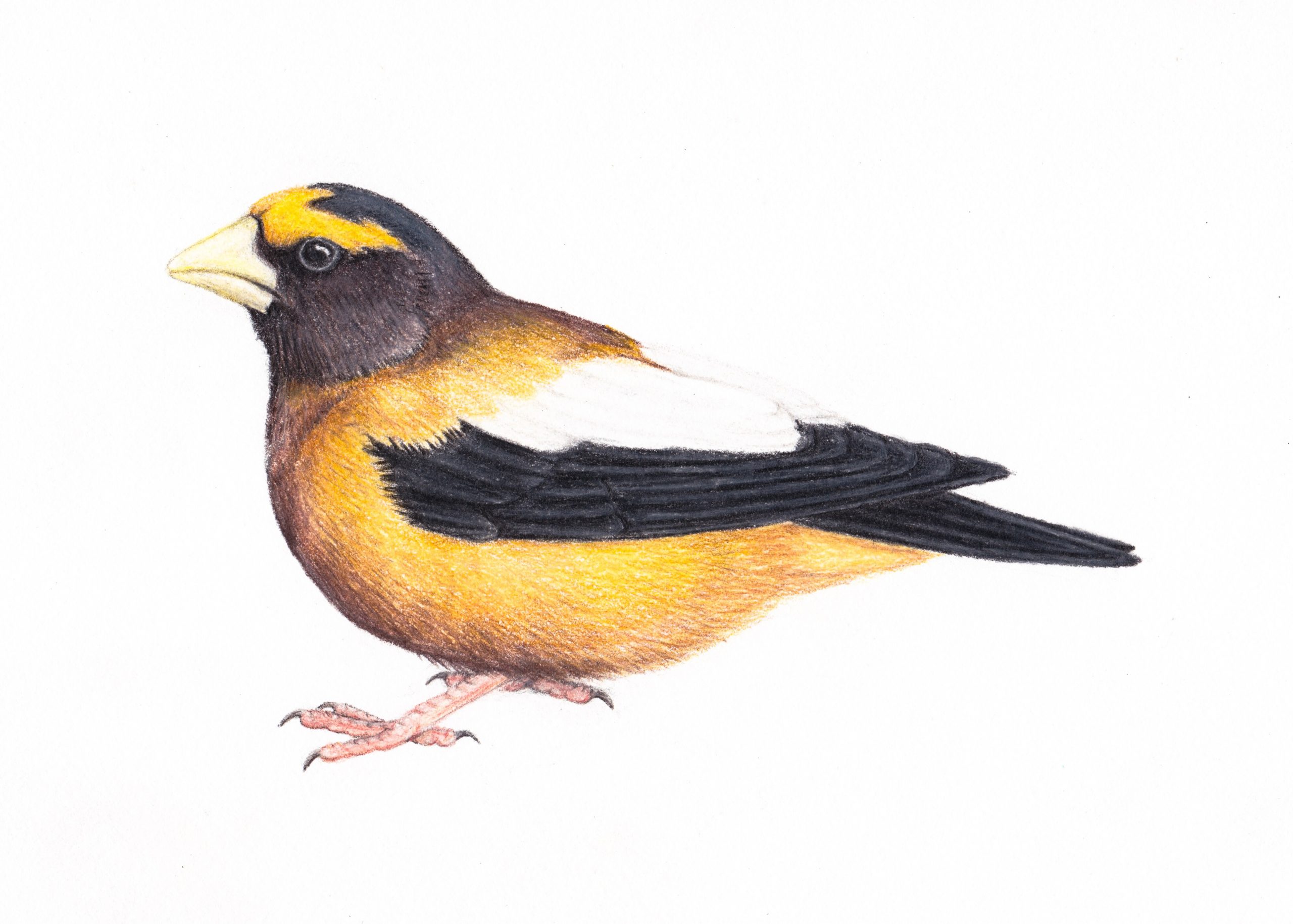 Many birders and nonbirders alike may be noticing a few different bird species that they don’t normally see at their bird feeders this winter.

Large yellow and brown finches with white and black wings and thick pale beaks have been seen invading platform feeders. Small streaked finches, slightly smaller than a goldfinch with a thin conical beak, and hints of yellow on their wings and tails are being seen hanging out with flocks of american goldfinches eating thistle and sunflower seeds. These two species, the evening grosbeak and the pine siskin are two species that have been seen in record numbers and are seen further south than in many previous years.

These species are just two examples of birds that usually spend their winter in parts of Canada, where they feed on conifer seeds found throughout the boreal forests. But some years these cone crops are sparse and species that rely on these for their food source need to go further south in search for food.

This causes what is generally called an irruption year. And this winter of 2020 to 2021 is considered the biggest irruption year in about 25 years for several bird species, mainly the evening grosbeak. The main contributing factors that cause these birds to move so far south in such large numbers is an abundance of food during their breeding season and then the failing of cone crops.

There are many species that rely on these cone crops during the winter season, some include evening grosbeaks, pine siskins, redpolls, crossbills, purple finches and nuthatches.

One of the contributing factors to the increase of these numbers of birds being seen further south than normal is the increase of food available during the breeding season. Outbreaks of spruce budworms in the boreal forests have been becoming more common, species like evening grosbeaks have benefited from this abundance of food to feed their young. But then afterword when their winter food source fails, that leads to a larger number of birds competing and then needing to travel further to find enough food.

These different winter visitors tend to rely on different cone crops for their main food source, pine siskins with spruce cones, red crossbills with white pine and redpolls with the birch crop for example.

But these irruption years are part of a natural cycle. Some years there will be plentiful seed production from conifers and other seed producing trees, but these are then generally followed by several years of smaller production of seeds.

Red breasted nuthatches have also been seen more often this year, though unlike most other species that were discussed this species shows up as a single individual at feeders. They tend to hang out with mixed species flocks like chickadees, titmice and finches. These little nuthatches are much smaller than their white breasted counterparts but share a similar feeding pattern of grabbing a single seed and flying off.

But these boreal finches aren’t the only species that can have an irruption year, another bird that this behavior can be seen in is the snowy owl.

But while boreal finch irruptions revolves around seed production, an irruption of snowy owls revolves around a little rodent called a lemming. This bird eats lemmings. And just like cone crops have a natural cycle, so do the lemmings. Their population has booms and busts depending on many environmental factors. But unlike finch irruptions, the lack of winter food and starvation does not cause an irruption year of snowies. About every four to five years there is a population of lemmings and other prey species, creating a great nesting season for these birds. Thus leading to an increase of birds leaving their arctic breeding grounds when winter comes.

And with all these birds migrating further and many species that like to make stops at backyard bird feeders, except for the snowy owl of course, it’s a good time to put that reminder out to regularly take your feeders down and give them a nice cleaning. With so many birds traveling in such high numbers from long distances, high traffic areas like feeders can cause the increased transmission of various bacteria and viruses. Examples include salmonella and conjunctivitis, both can be deadly to birds. This is a nice way to help keep the bird population healthy as you enjoy the sights and sounds of these arctic visitors.

This blog post is also available on my podcast World of Birds, it can be listened to on your favorite listening platform.