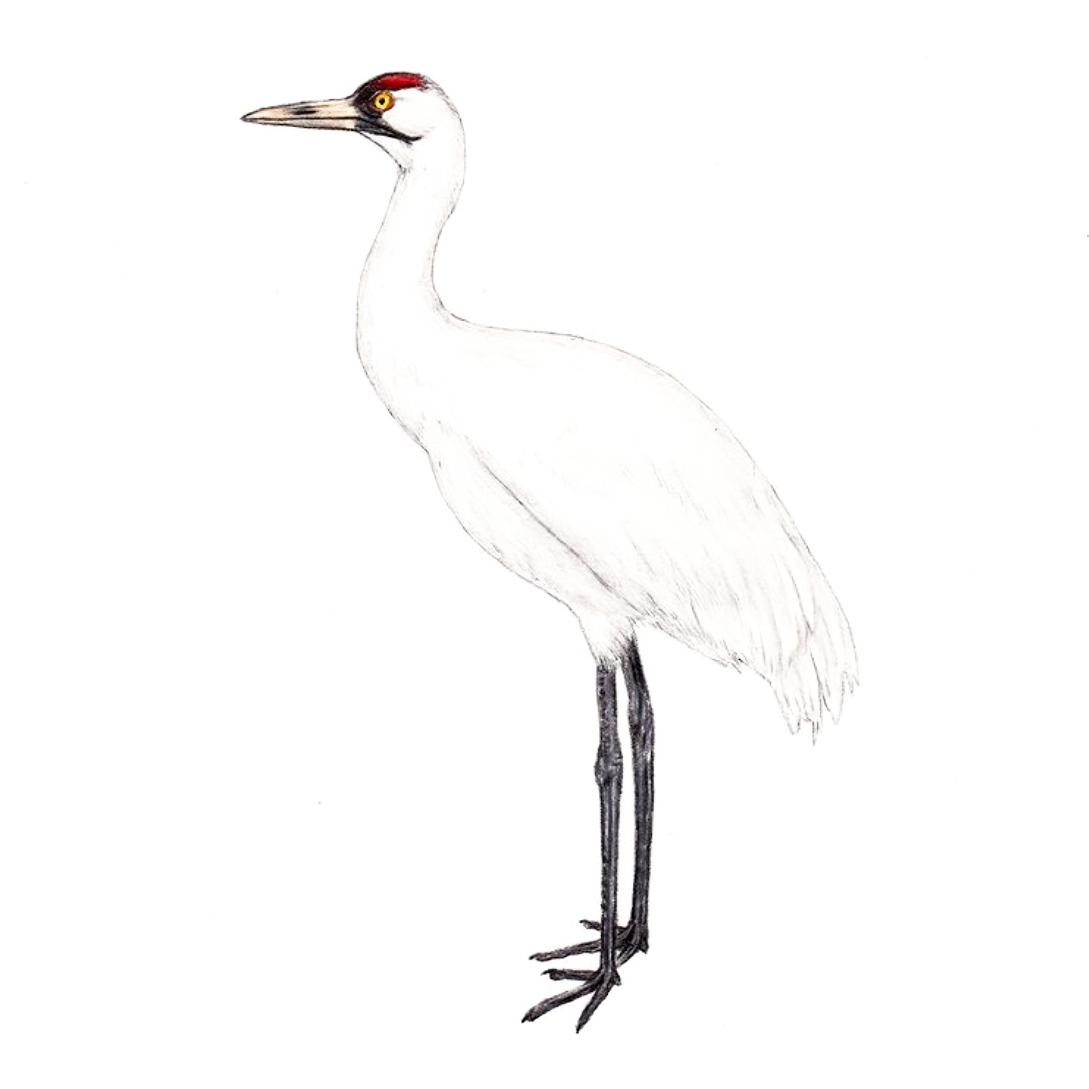 To start this series off with the honor of it being may 28th, which is whooping crane day, we will start with spotlighting this species and the process that it took to bring these species population to where it is today.

While you may be familiar with this bird’s cousin the sandhill crane, the whooping crane is not nearly as widespread. This beautiful elegant crane is almost all white with long black legs and a long gray bill with a peachy colored base. Their primary feathers on their wing tips are black. From their bill they have a black mask with a red crown. Their eyes are also gorgeous orange. They are also one of North America’s largest birds, standing at 5 feet tall with a wingspan of 7 to 8 feet.

Originally it is believed that the whooping crane population ranged from 15,000 to 20,000, but by the mid 1800’s that there were only anywhere from 1,200 to 1,500 whooping cranes in North America and Canada. It has been seen in past records from early american settlers that their range extended into 6 different provinces in Canada and seen in 35 different states in the US.

By 1942, the population of this elegant bird was down to only 22 individuals. This tragically low number is mostly attributed to human activities such as overhunting, and habitat loss from the development of marshlands, shorelines and prairies. During this time their prime habitats of wetlands were being disturbed as the settlers were plowing the prairies, draining the marshlands in order for these areas to be used for farming. As the heartland of the United States was being settled, and the whooping cranes and other birds lost their essential habitats, the cranes also took another hit. And this was widespread hunting and egg collection. These combined issues almost caused these birds to go extinct by the 1900’s.

Then in 1918, the Migratory Bird Treaty act was passed, this made it illegal to harm or kill most of the birds found in North America, including the whooping crane. Unfortunately this didn’t stop the decline of their population numbers. By the 1930’s, there were only two small flocks remaining, one in Louisiana that was non-migratory and one that was migratory that wintered in Aransas National Park in Texas but spent its summers in southern Canada. Unfortunately in the 1940’s, the small flock in Louisiana took another hit as a hurricane passed through their area and decimated their numbers which went from 13 down to only 6 individuals. By 1950 there was only one individual left of the Louisiana cranes. This individual was named ‘Mac’, and with no other members of this species left in the area, it was captured. From there he was transported to the migratory flock in Texas and introduced to their flock. Unfortunately it didn’t go to plan, within six months he was attacked and killed by a different whooping crane defending its territory. With this, all remaining whooping cranes resided solely in the migratory population that traveled between texas and canada.

In 1946, Robert Porter Allen was sent by Audubon to study the cranes located in Texas to better understand their life history, mainly to better understand their migration routes and find nesting habitats. Luckily in 1954, a nest was accidently found in Wood Buffalo National Park in Canada thanks to helicopters being in the area due to a recent forest fire. Studies were then done to track nesting attempts, success and colored band were used to track sex ratios and at what age they started to breed. With that and radio transmitters being used allowed them to track the cranes throughout their migration, which is full of dangers and approximately 80% didn’t make it, mainly from collisions with power lines.

Due to the fragile population of the whooping cranes, biologists started looking into captive breeding in order to try and safeguard the species. So in 1967 12 eggs were collected and brought to the Patuxent Wildlife Research Center in order to establish a captive population with the hope of releasing some. This facility would be the birthplace of the captive whooping crane breeding project. But the first whooping crane in the Patuxent Center was actually an injured juvenile named Canus, received from a partnership between Canada and the US and another human imprinted female from the San Antonio Zoo named Tex. This facility would raise and care for these birds for 50 years until 2017 when their crane program ends and their remaining cranes are sent to other breeding facilities.

Naturally whooping cranes lay two eggs, but usually only one chick will survive. Because of this, if both eggs in a nest were deemed viable one would be taken in for captive rearing without it affecting the wild population of cranes. But if they encountered a nest where neither egg was viable they would be able to replace one with a good egg from a different nest.

This captive program saw its first milestone in 1975 when those first wild eggs that were collected then hatched, produced their first set of their very own eggs. Then in 1989 22 captive cranes were transferred to the international crane foundation to keep two separate captive flocks to safeguard these populations from a natural disaster or disease outbreak.

The process of starting a captive breeding program saw lots of challenges.

To avoid the issue of the cranes imprinting on the care staff they wore specially designed outfits that were designed to resemble an adult whooping crane. They are basically a long jacket that also covered their face, on one hand was a puppet made to look like the face and beak of the crane and on the other hand was a black tip to resemble the black primaries of an adult. In a pocket of this costume they also have a mp3 device so they can play contact calls to the young chicks.

The next part of the plan would be to introduce some to the wild and create a new flock of cranes. So also in 1975 the US Fish and Wildlife Service and the Canadian Wildlife Service began to experiment with the best way to go about this next step. The first experiment was to substitute the eggs from the captive whooping cranes into nests of wild sandhill cranes. The goal was that these sandhill cranes would hatch, raise and then show the whooping cranes a same migration route; this option held much hope for the future of this project. While that part was successful, those eggs were properly hatched, and they were led to their safe wintering grounds, the whooping cranes unfortunately imprinted on their sandhill crane foster parents. Which caused them to have a bit of an identity crisis and they didn’t properly recognise other whooping cranes as potential mates. The population of whooping cranes in this experimental flock peaked at 33 individuals in the time frame of 1984 to 1985 with 289 eggs introduced at this point. No more eggs were added after 1989. By 1999 only 4 whooping cranes remained and by 2001 only two were left.

During this time a recovery plan was started by crane biologists. Their goal was to increase the wild flock located in the Wood Buffalo National Park to 40 pairs and to create 2 more flocks with a minimum of 25 pairs each. By 1993, 135 captive raised cranes from the International Crane Foundation were released into Florida Kissimmee Prairie. As of 1999 there were still 73 individuals in this new flock. And since this flock had no role models they did not migrate which helped avoid many dangers that they may have encountered on these long journeys. In 2002 a pair from this flock was successful in hatching and rearing a chick, making this the first wild whooping crane to hatch in the United States since 1939. In 2005 due to issues with high morbidity and poor reproductive success it was decided that no more cranes would be released. By 2018 the flocks numbers had dropped down to 14 cranes and the remaining ones were planned on being transplanted to the Louisiana flock.

A similar project was started in 2011 by the US Fish and Wildlife Service in Louisiana. This population is also non-migratory. They would be the first whooping cranes in Louisiana since the 1950’s. Ten juvenile cranes were released. It is hoped that this population would eventually be self-sustaining and to achieve that this flock has to grow to 120 individuals and approximately 30 productive pairs.

It was also decided that there needed to be another migratory flock and they had to find a way to teach these captive cranes the path to and from their wintering and summer grounds. An experiment was first conducted by an Idaho rancher named Kent Clegg where he trained reared sandhill and whooping cranes to fly behind his ultralight aircraft. So in October of 1997, Clegg led 8 sandhills and 4 whoopers on an 800 mile journey to a national park in New Mexico. These birds were successfully joined with 6 cranes from previous ultralight flights except for 2 whooping and 2 sandhills that were killed during the journey from hunter and predators.

An experiment was also done in 1997 in Ontario Canada by Bill Lishman and his team to use an ultralight to show a small flock of 7 sandhill cranes a migration route down to Virginia. This was done to see if these captive reared birds would be able to migrate back on their own. Then the next spring, 6 of these cranes successfully migrated back on their own to Ontario. Two more successful flights were done in 1998 and in 2000, this paved the way for an attempt of a flight with the endangered whooping cranes.

After the Florida program, a migratory population project was started in 2001. This project was developed by the whooping Crane Eastern Partnership and they planned and began to create an eastern migratory flock that would travel between Wisconsin and southern florida. They used a combination of the costume rearing for the chicks for release and ultralight flights managed by Operation Migration to guide the birds to their wintering grounds. Just like earlier tests with the sandhill cranes, these whooping cranes successfully migrated back to their nestling grounds in Wisconsin. With the completion of their own migration, juvenile cranes were able to be directly released into this established flock and they would then learn the route from the first introduced individuals. The. In 2006, the first eggs from this group hatched, and the one chick that survived made a successful migration down with her parents to Florida.

Even though the whooping crane has been federally protected since 1918 they still face the threat of illegal hunting, it is estimated that 20% of the eastern migratory flock has been lost to shooting. Even with these threats their numbers have been steadily growing and flocks expanding. It is estimated that there are now approximately 800 individuals with about 140 of those in captivity. About 500 in the Aransas/Wood Buffalo migratory flock, 80 in the eastern migratory flock, 75 in Louisiana and 9 in Florida.

All this is thanks to the protection of the whooping cranes habitat and wetlands and the hard work of many organizations such as Whooping Crane Eastern Partnership, International Crane Foundation, International Whooping Crane Recovery Team, Operation Migration Inc., National Fish and Wildlife Foundation, Natural Resources Foundation of Wisconsin, U.S. Fish and Wildlife Service, Patuxent Wildlife Research Center, National Wildlife Health Center, and the Wisconsin Department of Natural Resources. These organizations are the key to the whooping crane’s success and the increase of their numbers from only 20 individuals back in the 1940’s to having over 800 individuals like they do now.

It is with hope that with continued support and conservation of their habitats that these great birds can continue to expand their population and become more stable so that they can be around for a long time and not come this close to facing extinction ever again.