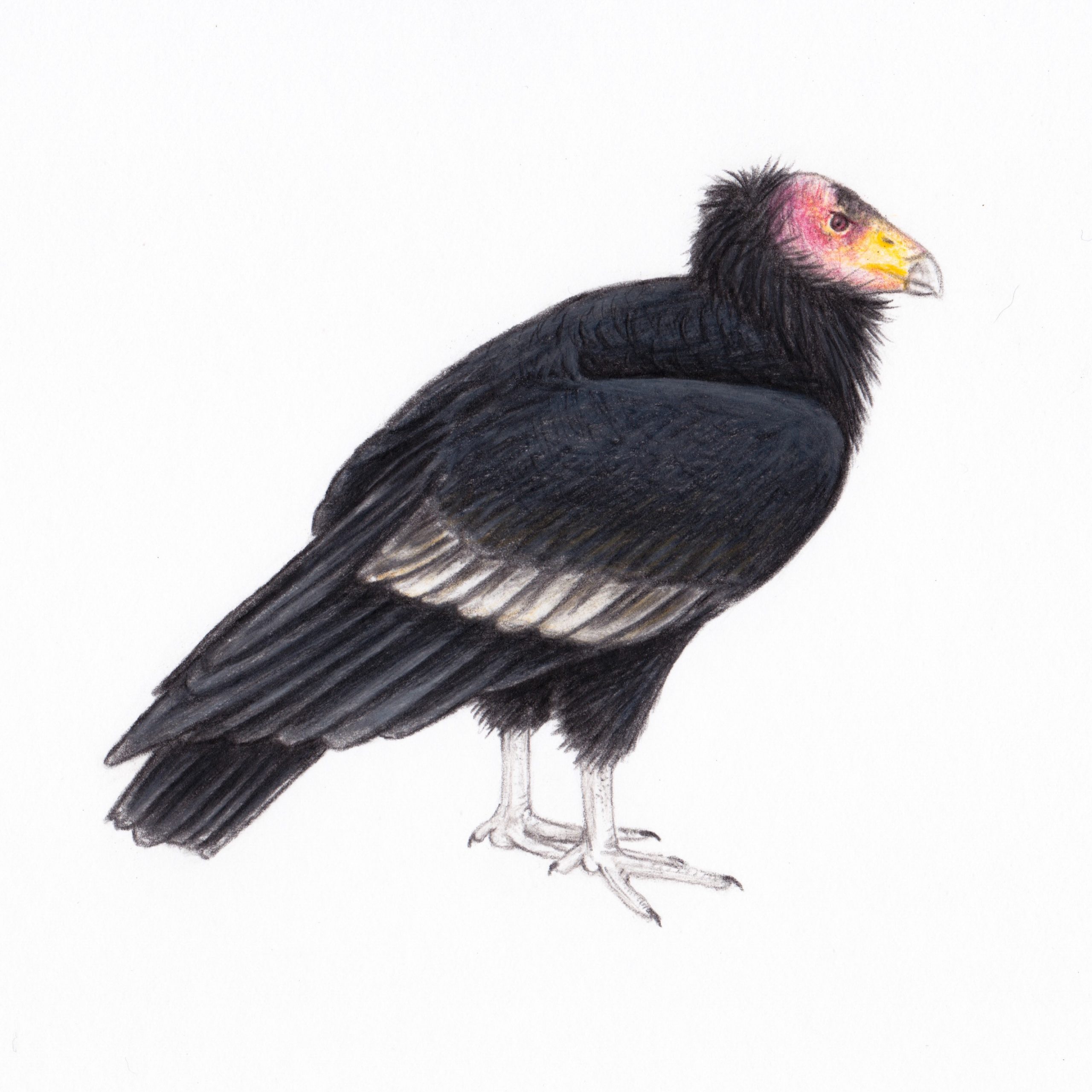 In 1987 there were only 22 california Condors left in the wild, numbers had plummeted and it seemed certain that this great bird would soon become extinct. That’s when a plan was put into action and every single wild california condor was captured and put into a captive breeding program with hopes of saving this iconic species from never being seen soaring over the canyons of the west ever again. And with all those birds now in captivity,the california condor was now considered extinct in the wild.

This is a story of one of the greatest conservation success stories in North America, the one of the California condor. This bird is one of only three species of New World vultures found in North America, alongside the much smaller turkey vulture and black vulture. The california condor is a very large bird with a wingspan of up to 9.8 ft which earns them the title of longest wingspan of any bird in North America. They are predominantly black with large white triangular patches under their wings. Their feet and legs are gray with an ivory colored bill, their heads and necks lack feathers and is a range from yellow to a reddish-orange. An interesting characteristic of theirs is also that the skin on their face can change by flushing depending on their mood which may serve as a way to communicate between individuals.

Historically, they ranged from the west coast and the southwest. Remains have been documented in several states including Arizona, Nevada, New Mexico and Texas. Lewis and Clark even documented and shot a California condor at the mouth of the Columbia River in the 19th century. Over time there range has diminished and before their capture they were only found in a tiny fraction of their former range.

Since these are such long lived birds, which can live up to 60 years, they are slow to mature and reproduce. It takes at least 6 years for them to reach sexual maturity. Once they are mature, they only lay a single egg every other year. This leads to their numbers not being easily replaced once their population started to decline.

Multiple causes have caused the decline of the california condor, from DDT, lead poisoning, microplastics, electrical power lines, habitat loss and poaching has caused this bird to almost disappear to the point of extinction. DDT was a commonly used insecticide, now banned, that affected the shells of many bird eggs, causing them to become very fragile. Many times, these eggs were so thin that they would crack and be crushed under the incubating parent. This affected many bird species, mainly larger species, not just the california condor. This chemical unfortunately is not completely out of the environment yet, as wash off has caused it to be present in some marine species.

Another threat that the California condors faced was lead poisoning. Them, being a vulture, their diet mainly consisted of scavenged carcasses. Some of these carrion was from large game riddled with lead bullet fragments from hunters. To stop this issue, California created the Ridley-Tree Condor Preservation Act which required people hunting to only be allowed to use non-lead bullets while hunting in the condors known range. This act not only helped the california condors, but also the local golden eagles, turkey vultures and other scavenging species. There was an article published in 2015 called “Condors or lead ammunition? We can’t have both” by Dawn Starin about the California Condor that stated that over 60% of all adult and juvenile deaths in the wild was from lead poisoning. She also states “Because condors have been known to live past the age of 50, do not breed until they are at least six years old, and raise only one chick every other year, their populations cannot withstand the mortality rates caused by this neurological toxin.” Terra Kelly, a epidemiologist also states: “Until all natural food sources are free from lead-based ammunition, lead poisoning will threaten recovery of naturally sustaining populations of condors in the wild.” Unfortunantly lead is still a big threat to local wildlife alongside the condors, in 2020 lead poisoning caused the death of nine condors and by August of 2021 five more died from lead.

Once the decline was noted, talk began on how to save the species. It was believed that the only way to save them from going extinct was to round them all up and create a breeding program. Not everyone agreed though, stating that they belonged to be free and it would cost too much. Nonetheless the project was approved by the United States government and on Easter Sunday in 1987 the remaining 22 wild condors were rounded up and brought to the San Diego wild animal park and the Los Angeles Zoo for a captive breeding program. Once these, several organisations including those two zoos and the Oklahoma city zoo and botanical garden started to figure out the condors mating and other habits.

A tactic used to help increase their number to cause a pair to double clutch, this happens when the condors lose an egg or young chick. They do this by removing a fertile egg causing them to lay another. This natural tendency allowed researchers to increase the amount of young produced each year, they would remove a fertile egg to hatch in an incubator and the pair would lay another to replace it which was then mostly left to the condor pairs to hatch and raise. The collected eggs were hatched in an incubator and the chicks were then raised by a caretaker using a puppet shaped like the head of an adult condor. This was done to prevent the young hatchling from imprinting on people, imprinting causes a bird to identify more with humans than they would with their own species.

As the number of condors in captivity rose, they began the process of reintroducing them into the wild. Then in 1992 the first california condors were released back into the wild, also in california. In 1996 some were then released in Arizona at the Vermilion Cliffs also. At this point the fish and wildlife service designated the condor population in Arizona as experimental and nonessential so that it would not affect local land regulation and development. This was done because local people and especially ranchers were concerned that they would be charged if any of the condors were injured on their property. To help combat one of the issues that wild condors were dying from, power lines, the captive bred california condors were trained to avoid them by the use of aversion training, this was successful in greatly decreased deaths.

Since their reintroduction, the california condor has hit many milestones. In March if 2006, a pair was seen attempting to nest in California, this would be the first time in more than a 100 years that a pair of condors had been documented nesting in northern California. Then in 2008, a great milestone of the program for this endangered species was achieved, there was once again more condors flying free than in captivity since the program began. In October of 2010, the wild population in California reached the great milestone of finally reaching 100 condors, at this time there were also 73 individuals in Arizona. A bit over a year later, in November of 2011, there were over 394 living california condors, 205 resided in the wild and the rest were in programs split between the San Diego Zoo, the Los Angeles Zoo, the Santa Barbara Zoo, the Oregon Zoo and at the World Center for Birds of Prey. Then, two and a half years later, the condor population had grown to 439, with 225 in the wild and 214 in captivity.

As of 2020 there were over 500 California Condor in the world, that is an amazing increase from back in 1987 when there were only 22 of these amazing birds left. This is all due to the many people and organisations that worked diligently to help save this beautiful bird.