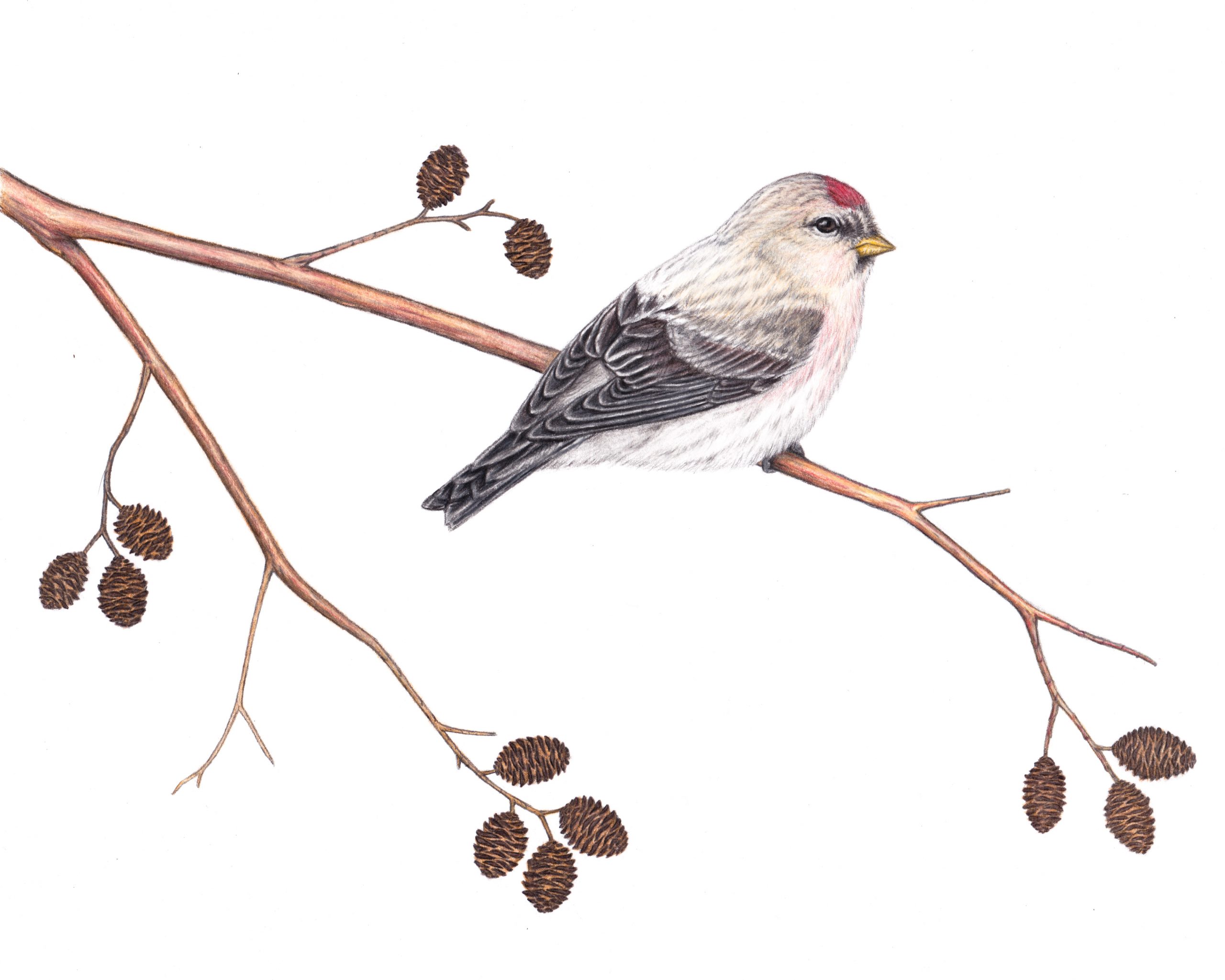 In the northernmost reaches of north america is a small little finch species, white and frosty as the snow and a red forehead. Both features give hints to this species name. This little round arctic bird is called the hoary redpoll.

This species spotlight episode is going along with my art project of lifesize birds of North America, and this episode is featuring the hoary redpoll. Just like my last in this series, this episode will go over all about this bird species, from what it looks like, habitat, diet, behaviors and some cool facts about it.

Native the the northernmost parts of North America, the hoary redpoll is a small songbird belonging to the family fringillidae. They are also called the arctic redpoll in Europe. This arctic bird is 4.7 to 5.5 inches or 12-14 centimeters long and weighs 11- 20 grams. The name hoary refers to the birds frosty appearance and redpoll is in reference to their red forehead patch. Like their name implied, they are a frosty pale white, with grayish brown streaks on their sides and some individuals have a pinkish wash to their breasts. They have a short grey notched tail and gray wings with white wing bars. On their forehead they have a red patch and their beak is short, conical and yellow. Juveniles tend to be more streaked and brownish, sometimes having a buffy colored face.

While being an arctic bird, they can be found from as far north as Greenland, and generally only as far south as the northernmost parts of the great lakes in eastern North America. There they can be found in the tundra in shrubs and short stunted trees. Though this species, along with the common redpoll, have a 2-year irruption cycle where they may even be seen as far south as the northernmost portions of the United States usually among flocks of the very similar looking common redpolls at backyard bird feeders.

There are two recognised subspecies of the hoary redpoll. Hornemanni, which lives in northern Greenland and the baffin island, is larger and paler. And exilipes, which generally live in northern Canada and Alaska, are smaller and generally a bit darker.

When its not breeding season, these redpolls travel around in groups looking for food like seed rich fields. Some hoary redpolls actually will overwinter so far north in windswept areas, where they endure months of darkness, brutally cold temperature and strong winds.

Hoary redpolls primarily eat a variety of seeds including those from alder, birch, willows and many different species of grasses, weeds and shrubs. Alongside seeds they also eat various buds and catkins. During the warmer months they also include insects and spiders in their diet. They can be acrobatic little birds and sometimes will hang upside down to try and reach seeds hanging from branches or to try and grab an insect such as a fly, butterfly or moth.

They also have a cool adaption for storing seeds, in their esophagus are special pouches where they can store seeds. This allows them to collect as much food as possible then later regurgitate and shell the seeds later.

Their courtship involves the male singing while flying back and forth and hovering over the female.

To nest, hoary redpolls tend to select areas of higher elevation or barren areas. Their nests are usually not far from the ground, about 2-3 feet, in a shrub or tree. They are particularly fond of alder, birch and willows. They will nest in both dry and wet areas of the tundra, sometimes right alongside creeks or rivers. Additionally they have been known to nest in rock crevices,holes in wood and directly on the ground. The nest, which is built by the female, is cup shaped and is constructed out of stems, grasses, fur and feathers. These nests are usually about 4 inches wide and 3 inches tall. Inside the nest 1 to 6 pale green or blue eggs with dark speckles are laid. The eggs are solely incubated by the female, where the maile will bring food to the female on the nest. After 9 to 14 days, the eggs will hatch where then both parents will feed the newly hatched chicks. Then after an additional 9 to 14 days, the chicks will fledge.

Here’s a fun fact! The oldest recorded Hoary Redpoll was at least 6 years, 9 months old, it was a recaptured banded bird in Alaska.

Because they live in such remote areas, not much is really known about their current population. Although it is estimated that their current breeding population is about 28 million individuals, they are classified as a species of low concern.