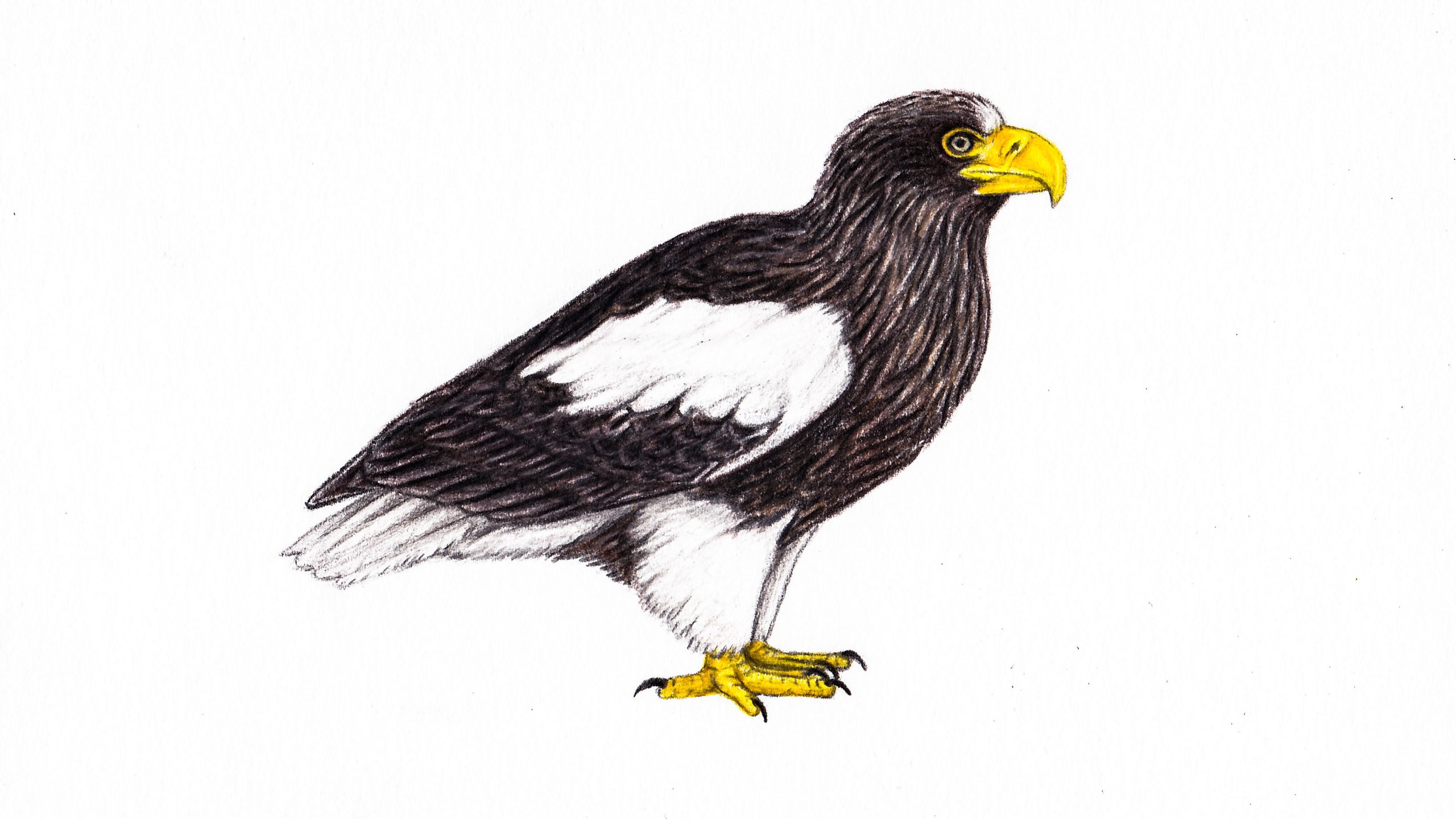 On August 30th 2020, a steller’s sea eagle was seen at Denali National Park in Alaska. This was not the first time this species has been seen in this state, but it was unusual in the fact that this individual was seen so far inland. Afterwards, on March 10, 2021, it was then spotted at Coleto Creek, Southeastern Texas and since then it has gone to New Brunswick, Nova Scotia, Massachusetts and now finally has been spotted in Maine where it has been since December 30th. This is weird, as this species’ native range is about 5,000 miles away in Asia and Russia. This eagle has been labeled the rarest eagle in America and it is rare even in its home territory, where there are only about 4000 – 5000 individuals total.

The Stellar Sea eagle (Haliaeetus pelagicus) is a massive diurnal bird of prey belonging to the family Accipitridae. Named after Georg Wilhelm Steller, a German naturalist, but it also goes by several different names including Steller’s fish eagle, Pacific sea eagle, or white-shouldered eagle. In different countries it is also given different names, in Russia, it is called several including morskoi orel (sea eagle), pestryi morskoi orel (mottled sea eagle), and beloplechii orlan (white-shouldered eagle). In Japan, it is named ō-washi (large eagle or great eagle).In Korea, the eagle is named chamsuri (true eagle). It was first described as a species by Peter Simon Pallas in 1811.

This large eagle is mostly dark brown to black with white on their upper-wing coverts, underwing coverts, thighs, forehead patch and also has a white wedge shaped tail. Its brown and white paddle-shaped wings can reach lengths of up to 8 feet long.Their massive beak and feet are a bright yellowish orange. The steller sea eagle’s large bill is about 4.6 inches long, looking disproportionately large when compared to other species such as the bald eagle or the White-tailed eagle. This bill is believed to be the largest of any living eagle species. On the bottom of their large yellow talons, like in other fish and sea eagles, they have spicules. These are bumps present on the bottom of their feet that help them have a better grip of slippery fish. Their vocalisations are also similar to other sea eagles, barking like croaks, and during mating displays they may use a call comparable to a loud deep voiced gull.

It is also one of the heaviest eagle in the world at about 11 to 20 pounds or 5-9 kg. Their length ranges from 2 ft 9 inches to 3 ft 5 inches. The female and males have identical plumage but the female can be up to 19% larger than the male and can be up to 79% heavier. Another unique feature of this species is that of all sea eagles, they are the only one with a yellow bill even as juveniles. In addition they possess 14, not 12, rectrices, which are the large feathers in a bird’s tail. While they have no subspecies, there is a dark morph which was once considered a different subspecies. This morph lacks all white in its plumage except for their tail.

Like its name implies, its main diet consists primarily of fish, along with various other prey species. One of their main prefered fish is the Pacific Salmon. Like other eagles in the Haliaeetus group, they prefer to hunt for fish in shallow water. Some of the other fish species this bird preys upon are several other salmon species, trout, graylings, bering wolffish, cod, pollock, and lumpfish. Along with fish, this eagle will also prey on other mammals and birds such as fox, mink, hares, seals and other various small mammals like voles. Bird species they have been known to prey on include gulls, various seabirds, duck, geese, swans, herons, and cranes. They also will scavenge seals, bird, gull and even Sika deer carcasses.

The Steller’s sea eagle breeds on the Kamchatka Peninsula, the lower Amur River, northern Sakhalin and the Shantar Islands in Russia. During the winter, most spend this time in the southern Kuril Islands of Russia and Hokkaidō, Japan. While not as vagrant as the white-tailed eagle, it has still shown up in areas such as Beijing, China; Yakutsk, Russia; and as far south as Taiwan.

Although the steller’s sea eagle may reach its adult plumage by age 4 or 5, they wont bsexually mature until around age 6 to 7. Once reaching this age they will form a monogamous pair. Each pair will construct a large stick nest that can end up being up to 2.5 meters wide and 4 meters deep. Its nests are built on large rocky outcroppings or on top of large trees alongside the coast and large rivers. Areas with large Ermans birches and forests with larches, alders, willows and poplar are their prefered nesting locations. Then in mid April or early May, they’ll begin to lay their eggs. Clutches are usually 1 to 3 greenish-white eggs layed around April to May. Incubation is usually 38 to 45 days and takes about 70 days to fledge. Afterwards, they will stay dependent on their parents for up to 2 to 3 months. Usually only one chick will survive from each clutch, but if food is plentiful, then two or three may survive.

The chicks are covered in a white down when hatched. Soon after, this down will turn into a smokey greyish brown. Like other sea eagles, the rectices (tail feathers) and remiges (the flight feathers in the wing including the primaries, secondaries and tertials) of first-year birds are longer than an adult’s. The juveniles also have a similar plumage to adults, with being an uniform dark brown with some grayish brown streaking on their head and neck, white feather base and a white tail with dark mottling. When young, they also have a dark brown iris, in contrast, adult iris is yellow. Like many birds, this eagle takes many years to reach its adult plumage. This definitive plumage is usually reached after about 4 or 5 years.

When overwintering, these eagles prefer forests, rivers and lakes along the coast. Then,starting in late march, the eagles begin to migrate back north. Adults will usually start migrating before the juveniles do. On their journey back to their breeding grounds, they tend to follow the sea coast and usually travel alone.

The steller’s sea eagle is currently listed as vulnerable, with a population estimated to be about 4000-5000 individuals with 1,830-1,900 breeding pairs. Their numbers have been slowly declining; in the 1990’s, it was estimated at about 7500 individuals. Their range has also been decreasing, they used to been known to breed in Korea in the past, but now they are just seldom visitors. Some of their main threats currently are habitat alteration, lead poisoning from ingesting lead shots, being hunted, and natural collapses of their eyries.

Cornells birds of the world