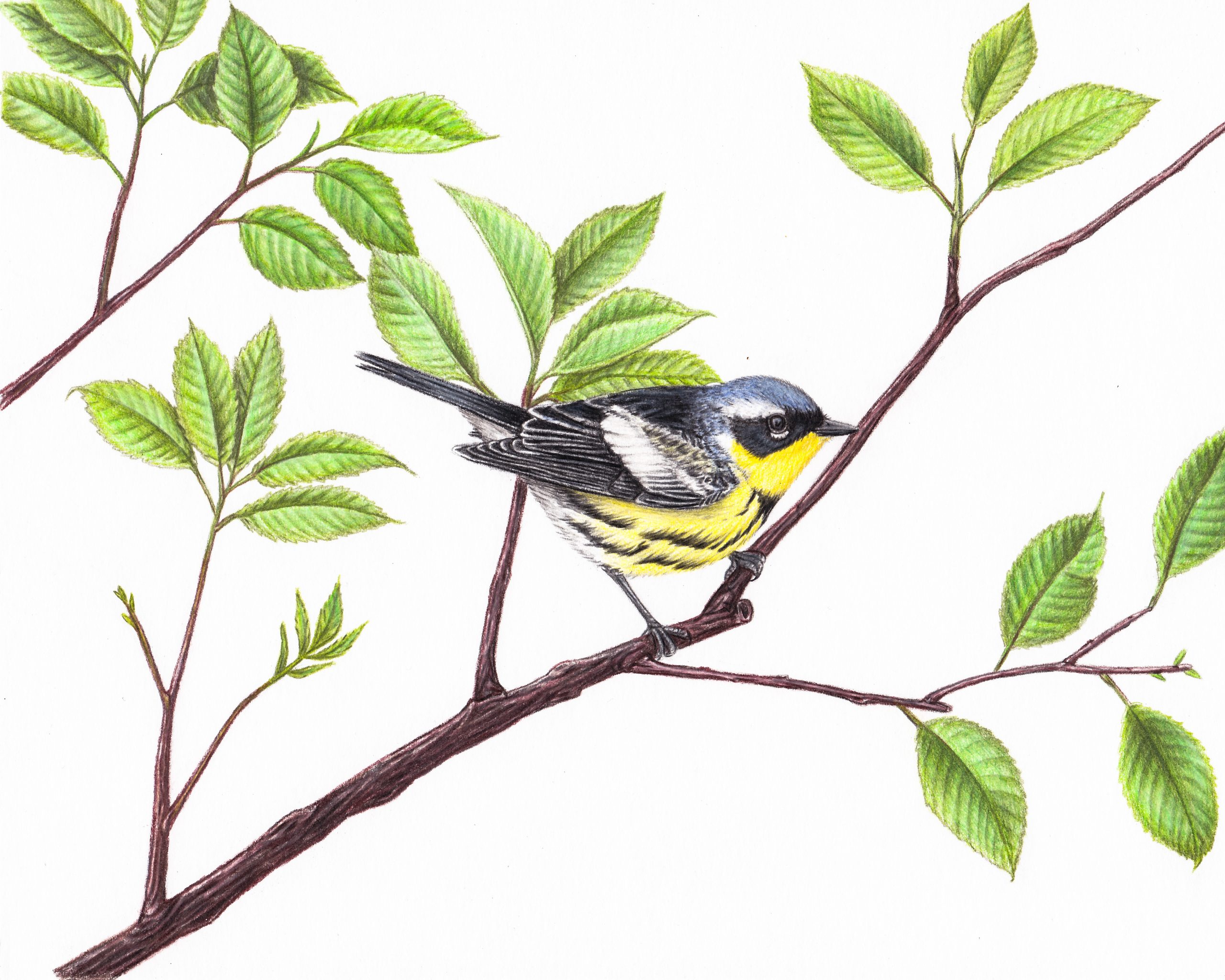 One of the highlights in spring is going birding to see and hear the colorful songbirds that have migrated back from their southern wintering grounds. These little songbirds are as brightly colored and diverse as their musical songs, whistles and trills. This colorful group is the parulidae family, also called the new world warblers or wood-warblers.

The family parulidae consists of 111 species in 18 genera. This new-world warbler’s family was first introduced by American ornithologist Alexander Wetmore and his colleagues in 1947, after the northern parula. Which was originally considered a tit, with the scientific name Parus americanus, which then was changed to parulus and then finally to parula. It is believed that this family first evolved in Central America, where many species started migrating north during interglacial periods before migrating south again. It is believed they originated in this region to the their being the greatest species diversity located there.

This bird family displays a wide variety of colors including black, grays, yellows, oranges, browns, reds, and even pink, often being given the nickname “jewels of the forest”. Though yellow and olive tones seem to be the most common color found throughout this family. Many species have striking coloration, many with contrasting black and bright reds, oranges and yellows like the blackburnian warbler or the american redstart.

This family can be found throughout north, central and south america. Many species in this family are year-round tropical residents, but the others are migrants that breed in North America but migrate long distances to their wintering grounds in Central and South America. One of the extreme examples of migration in this family is from the blackpoll warbler. This little 20 gram warbler, that’s mostly black and white, with a black cap and white cheek and white wings bars makes an incredible yearly migration. During the summer months this songbird breeds in the boreal coniferous forests of northern North America, from Alaska to New England. Once fall arrives, they migrate through North America, down to the Greater Antilles and parts of the northeastern coast of South America. This great migration can be about 2500 km one way, non-stop and over open water, making it one of the most incredible flights found in any songbird.

Overall, species in this family group are very similar in body shape, size and features. They tend to have shorter, slender pointed beaks with medium length thin legs and medium length tails. Many have some sort of facial marking with a dark, almost black eye. Their toe pattern is anisodactyl with three toes pointing forward and one backwards, which is typical of perching birds.  This family also has 9 primary feathers compared to other songbirds which usually have 10.

The new world warblers range in size from the smallest, Lucy’s warbler, which only weighs up to 8 grams and 12 cm long, to the largest being the louisiana waterthrush who can weigh up to 22.9 grams, 15.5 cm long and a wingspan of 27 cm.

Birds in this family can either display sexual dimorphism or are monomorphic. Males of migratory species tend to more often have flashy alternative breeding plumages, since they have the need go claim new territory and attract mates each year, while nonmigratory species that live in the tropics don’t tend to display this dimorphism as they reside in the same territory year round and tend to pair for life. There are exceptions to these general rules though, the migratory waterthrushes and ovenbird look the same, whether they are male or female. Then there are the non-migratory tropical yellowthroats that do display sexual dimorphism. During the fall, many migratory males will molt into drabber fall plumages that more closely resemble females plumage.

The parulidae family can be found in a wide range of habitats including coniferous and deciduous forests, fieldlands, shrublands, marshes and wetlands. Most species tend to be arboreal though, spending most of their time in the trees, but there are some that do spend much of their time at ground level like the ovenbird or worm-eating warbler. For the species that are year-round tropical residents, those tend to live in the lowland rainforests or the cloud forests in higher elevation.

Most species in the parulidae family have a diet primarily consisting of insects. Some species though will include small fish, fruit, berries, seeds or nectar in their diet. They tend to be very active feeders, moving from branch to branch gleaming insects from leaves and from branches. This can often be very frustrating to birders as they try and get a glimpse of these beautiful birds as they quickly move around through the dense foliage in the tree canopies. Yellow-rumped warblers will often stay for the winter in northern climates by relying on a diet of mostly berries.

The parulidae family are usually socially monogamous with both parents caring for the young. Most nests in this species group are open cups constructed anywhere from ground level to high up in the trees. Only two species, the prothonotary warbler and lucy’s warbler, nest in cavities. The ovenbird is one such species that builds its nest directly on the ground. On average, two to seven eggs are laid in each clutch, with the migratory species tending to lay larger clutches due to the hazards facing them from migrating every year and their higher mortality rate from the journey. The female is generally the one who constructs the nest and incubates the eggs with the male bringing food to the female during this time. Incubation time for the eggs can take from 11 to 17 days on average. Once the eggs hatch, both the male and the female will care for the young and after 8-15 days they will fledge. After fledging, the parents may still provide additional care for the young for up to an additional month but tropical species may still stay with the adults until the next breeding season.

Habitat loss is one of the main threats this family faces. Of the 111 species in the parulidae family, 24 are threatened, including 10 near threatened, 6 vulnerable, 6 endangered and 2 critically endangered. Both the Bachman’s warbler and the semper’s warbler, currently listed as critically endangered, are likely already extinct. The semper’s warbler, a small gray and white warbler with yellow legs, was only found in Saint Lucia. It was reported to be common during the 19th century but the last reliable sighting of this species was in 1961, though there have been several unconfirmed sightings since then, the main factor that is believed to contribute to their downfall was the introduction of mongoose to the area. The bachman’s warbler, last seen in the 1960’s, used to have a range in the southeastern and midwestern United States and wintered in Cuba. Like many species, habitat loss decimated their population and led to the cause of their probable extinction. Those that are listed as endangered are all species with a very restricted range. For example, the endangered golden-cheeked warbler can only be found in small patches of oak-juniper woods in central texas. The kirtland’s warbler is another species with very specific habitat needs with an incredibly small breeding range. Their habitat must be young jack pine forests that are about 5-15 years old with trees ranging in size from 5-15 feet tall. Habitat management such as managed burns and clear-cutting has shown great success, along with trapping and removing cowbirds, which was another threat facing the nesting birds. With these measures in place, their numbers have increased five-fold and the kirtland’s warbler was able to be delisted in 2019.

Cornell’s birds of the world