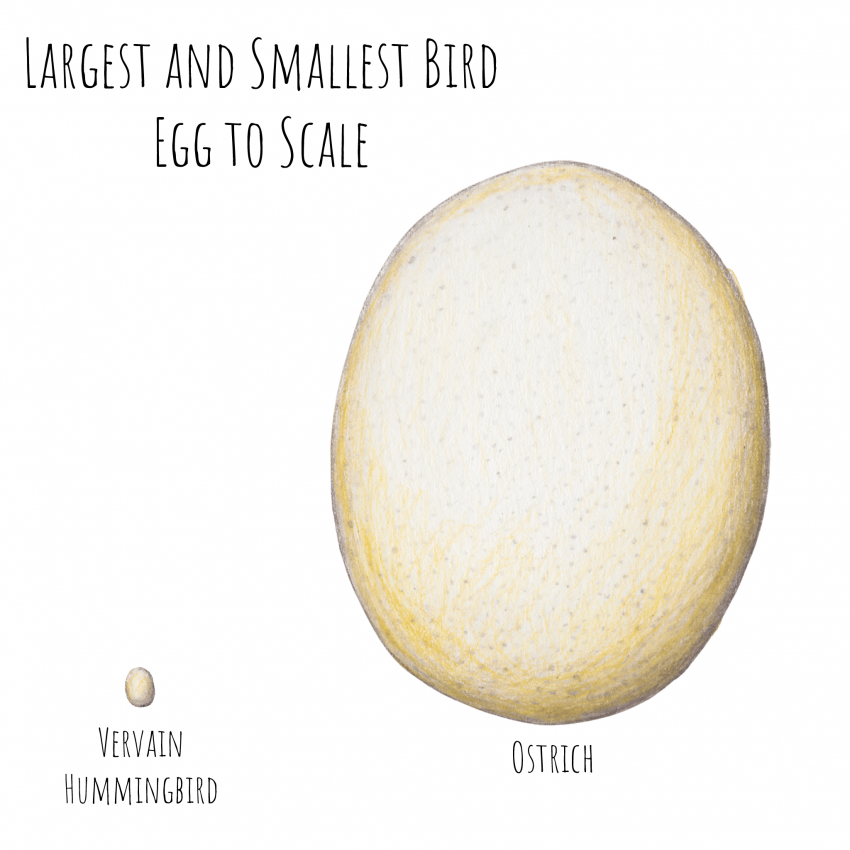 Bird eggs are a very unique period in a bird’s life. They, like birds, come in a wide variety of colors and shapes. They have their own unique adaptations to give them the best chance of making it to hatching. The egg shell’s purpose is to be strong enough to protect the baby birds growing inside but yet fragile enough to allow the hatchling to break out when it’s ready, all the while keeping the chick growing inside safe.

While there are other animal groups that lay eggs, such as amphibians, reptiles, insects, birds are the only group that display such coloring and ornamentation. Eggs have evolved to be a self-contained system, all they need to grow the young inside them is warmth and oxygen. Each egg is covered with microscopic holes allowing oxygen, carbon dioxide and water vapor to pass through the shell, to and from the developing chick.

It all starts in the female bird, from a single ovary. At the time the ovum is released, it is basically just a yolk, as it travels down the oviduct and possibly fertilized, the albumen, the egg white, is added. As it continues on, water is added and this mass is then encased in a thin, stretchy membrane. After this membrane has encased the soft initial mass, calcium carbonate is added and begins to form a shell with minerals being deposited from special cells lining the inside of the uterus. If the species egg generally has different colors, spots, speckles or any form of pigmentation, this last last step is when the pigmented proteins are deposited, usually right before the egg is laid. The whole process from the released ovum, to being laid, takes about 24 hours.

Eggs can come in a wide variety of shapes, sizes and patterns. From the simplest plain white egg, to being brown, gray, green and even blue. They can be a tiny egg from the vervain hummingbird, which is only about 1 cm long and about the size of a tic tac or huge like the egg of the ostrich, which is about 6 inches long. While some eggs may just be one color, others can be covered in a wide variety of spots, speckles and streaks.

Even within one species, there can be a variety of different patterning on their surface. The common murre, for example, has eggs that have an incredible variety of different stripes, swirls and patterns on their surface. Each egg is distinctive from another which is believed to help each parent to be able to identify which egg is theirs among the hundred of eggs that are in their nesting colony.

The process of pigmentation being added has been described in Tim Birkheads book ‘The Most Perfect Thing: Inside (and Outside) a Bird’s Egg, as a system of paint guns, with each gun being genetically programmed to spray at a certain time to create the bird’s species specific color and spotting or speckling. Though the exacts of this process is still for the most part unknown.

While looking over the variety of colors that appear on bird eggs, you may be surprised to hear that all of these colors come only from only two kinds of pigments. These two pigments are called protoporphyrin and biliverdin. Protoporphyrin produces reddish-brown colors and biliverdin produces blue and green colors. Depending on the amount of either pigment, the egg can become a wide variety of colors and shades. The bright blue in a robin’s egg is from only biliverdin pigment and the brick-red of the cetti’s warbler is from only protoporphyrin pigments. If neither pigment is used then the egg would be plain white.

Cavity nesting birds tend to have all white eggs, the belief behind this is that since they aren’t out in the open and visible to most predators, there isn’t much need for specklings and patterns to help camouflage them. In addition, being white may help the parents to see their eggs in a dark nesting cavity. There are exceptions though, the black capped chickadee has a mostly white egg with lots of brown speckling.

While all bird eggs are made of a base of calcium carbonate, both the under layer of the shell structure and the outer coating, the cuticle, can vary between species. Some species, like those in the tinamou family, lay eggs that have a protein-based coating over them, giving them a glossy shine. Many duck eggs are oily and waterproof, cormorants are chalky and rough and cassowary eggs have dimpled eggs.

While most species have egg pigment that is just a thin layer over the shell, some species like the guira cuckoo have pigment that goes through the entire shell. This species also has white chalky deposits over the surface of their eggs, making it resemble the surface of the moon. These white deposits are a layer of chalky calcium carbonate called vatedite and are structurally different from the eggshell. Over time during incubation, these structures will flake off leaving spots of gray or turquoise where they once were. These structures can also be seen in some species of anis, which are also communal nesters. This chalky layer is believed to act as a sort of bumper on the egg to help prevent damage if they bump up against other eggsin the nest.

While some eggs can be one solid color, others can be covered in a variety of spots, speckles and streaks. One reason for this pigmentation on eggs is to aid in camouflaging them from potential predators. Species that nest out in the open on the ground are especially susceptible to predation. Many of the most spotted and streaked eggs belong to this group as they make their eggs blend almost perfectly with the sand, rocks, pebbles or surroundings that the eggs are laid on. As always, there are exceptions, the tinamou family discussed earlier, for example, nest on the ground but have brightly-colored highly-visible eggs. One theory about why some species don’t lay camouflaged eggs is because there is always a parent sitting on the eggs, hiding them from sight of potential predators and therefore not haveing much of a need for these added color proteins.

Another benefit to having different pigments and patterns is to help avoid and deter brood parasites. Brood parasites are species who will lay their eggs in the nest of another species, getting the host species to raise the parasites young. Many in the US are familiar with the brown-headed cowbird who lays its heavily brown-spotted egg in a wide variety of host species, even nests where the host species eggs look nothing like the cowbirds egg. Cuckoo are also famous for this nesting style, but in regards to matching the host species, they are a bit more advanced. They may specifically seek out nests whose host species’ eggs look the most similar to their own.

While a species egg tends to be consistent in its overall color and pattern, there can be situations that would change the coloration of an individual egg. If a female bird doesn’t ingest enough calcium, receives a poor diet, is sick or is under extra stress, some eggs may be laid without the normal pigmentation, may be paler or slightly off in shape. Even in a single clutch, it is not unusual for each egg to have slightly different pigmentation.

While there is a general ‘egg-shape’, not all follow this guideline. Owls can have eggs that are mostly round, hummingbirds have more elliptical shaped eggs, and some shorebirds and seabirds such as murres are greatly tapered and may come to a more narrow pointed end. This shape is often seen on ground nesting birds, it is advantageous that when disturbed, they would roll in a circle instead of away from their nest, possibly preventing them from situations where they may accidentally roll off a cliff or other hazards.

But then overall, why do different species have different shaped eggs? In the past, factors such as nest shape, nest location as well as number of young was believed to be the main factors. Through studying thousands of eggs, scientists now believe the main factor for what shape a species eggs are is based on how much time a species spends in flight. Species that are long distance migrants like sandpipers and other seabirds or spend most of the time in the air like hummingbirds and swifts, tend to lay elongated eggs while species that tend to spend most of their time perched like owls and trogons tend to have eggs that are much more round. The belief is that species who spend the majority of time in the air require a very streamlined body, often with narrowing pelvis , requiring their eggs to also be more streamlined.

Another interesting adaptation can be seen when you compare the eggs of precocial and altricial bird species. The proportion of their yolk will differ between the two. Altricial species, those who hatch with eyes closed, barely feathered and dependent on parental care, need less stored energy and generally contain about 25 percent yolk. Precocial species, those that can generally walk and feed themselves shortly after hatching, need more energy to develop to that point inside the shell, containing about 40 percent yolk. There are even species called super-precocial that upon hatching are for the most part ready to even fly, like the megapodes of Australia, which may contain up to 67 percent yolk.