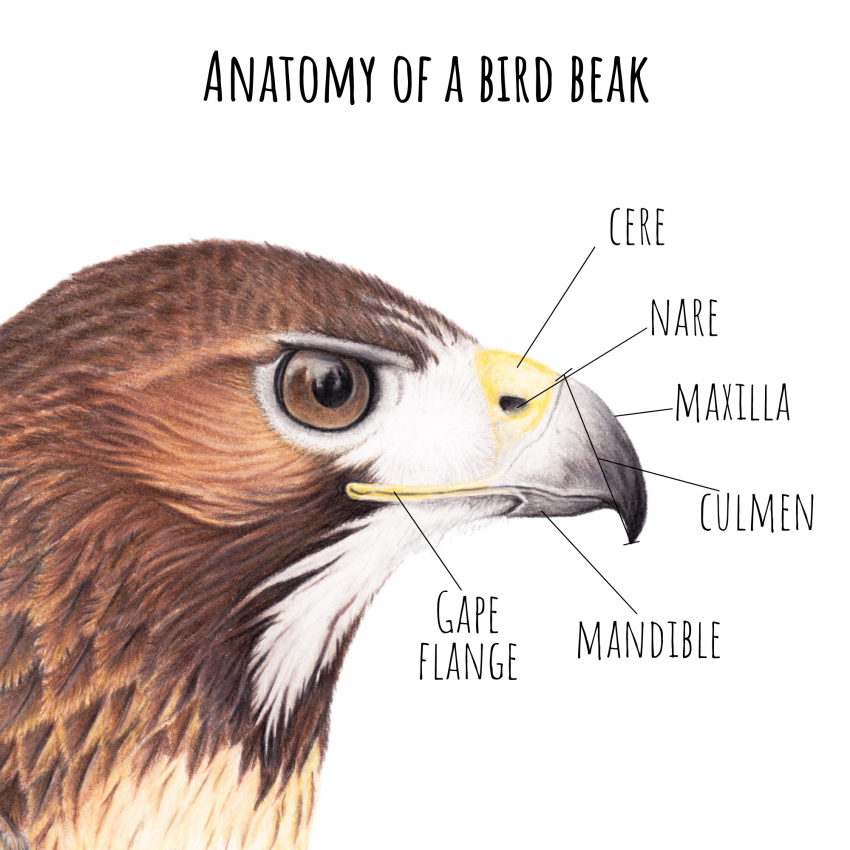 In a previous blog post I went over some of the many different shapes a bird’s beak may have and how they are adapted to their diet, but I never went over what parts of a bird’s beak actually are. They are an important part of the topography of a bird and to truly appreciate this diversity, it helps to know what features can vary from species to species.

So let’s take a closer look at this part of a bird and what makes up a bird’s beak.

The bill or beak mainly consists of a bony structure, followed by a vascular layer that contains blood vessels and nerves and the outer sheath called the rhamphotheca. This is the part that contains the color and patterning of the species. Just like our fingernails, a bird beak is made out of keratin.

The inside of a birds mouth is the gape. Connecting the two half of the beak is the gape flange, which is the fleshy area at the base of the bill where those halves meet. This part of the beak is often enlarged in baby birds to encourage the parents to feed them.

A common measurement taken by bird banders/ringers is the culmen. This is the length from the maxilla emerges from the forehead feather to the tip of the bird’s beak. In some species there is actually a raised ridge along the top of the maxilla.

The bird’s nostrils are called nares, which are usually located at the base of the beak (though this is not the case in all species). These two holes that connect to the birds respiratory systems can be either circular, oval or slit-like in shape. Some species like parrots and birds of prey also have fleshy tissue surrounding the nares, which is called the cere.

There are several other parts of a birds bill that may be present only in specific bird families/groups but I will save those for their very own post.

Maxilla– Upper half of the beak (also called the upper mandible)

Mandible– Lower half of the beak

Gape– Inside of a birds mouth.

Culmen– Upper ridge on the Maxilla. Measured in a straight line.

Cere– Fleshy area surrounding the nares, not present in all species.